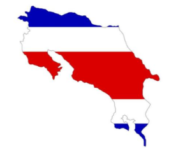 Costa Rica is a Central America upper middle-income country with a population of 5 million people, out of which 50% constitute the labour force. The population is relatively young; 64% is under 40, and only 13% is over 60. Costa Rica is an example of successful development in the region, largely due to its open economy and enabling business environment, supported by a sound legal system, and a history of stable democracy, peace, and rule of law. It is the 3rd largest economy by GDP in Central America, following Guatemala and Panama, and in terms of GDP per capita ($US 12,238.4) it is the 2nd most important country in the region, only behind Panama. Costa Rica strongly stands for health and education; its government expenditure on healthcare as a percentage of GDP accounts for 9.9%, and 7.6% on education. According to WEF Global Competitiveness Report 2019, Costa Rica ranks 25th in “Health”, 26th in “Skills of current workforce”, and 1st in Latin America for “Human Capital”. It is also a biodiversity and sustainability champion, accounting for 5% of the Earth’s biodiversity, and named in 2019 as the “UN Champion of the Earth” for pioneering fighting climate change. It has a strategic geographic location with coastlines to the Atlantic and Pacific oceans. Costa Rica has a diverse, innovative, and knowledge-based global trade platform. Its top product exports are medical instruments, bananas, tropical fruits, coffee, and other edible preparations. Its top services exports are personal travel, miscellaneous business (e.g. accounting, finance, HR, logistics, data processing, R&D), IT & telecom, transport, and manufacturing transformation.

Download the full Brief Economic and legal considerations for start-ups and scale-ups wishing to do business or invest in Costa Rica.